What do you need to set-up?

To be able to register the Google Home Mini device and set-up you need a wifi connected tablet or smart phone with the Google Home application running, then it is quite a simple process to set-up.

To run this project I set-up a new dedicated google account to use, which takes a couple of minutes.

The model that I will be using is that Smart phone won’t be available for day to day use, neither resident in the huse uses one, so it will be configured and then we will try and use the Mini alone – with remote access and support to the google account by myself as needed.

Setting up – BT Home Hub 5 and Google Home Mini will not work out of the box, with default settings!

So having followed the set-up out of the box, Google Mini would detect and respond to commands (i.e. “Play BBC Radio 4”) and it would respond with “ok now playing BBC radion 4 on BBC” but no sound & no streaming..

After a few hours trying to sort got onto Google via the online chat support – only took them a few minutes to explain that needed to reconfigure router, well actually turn off Smart Setup (which by default is on – see picture on post) – once done streaming Radio works fine.

But as one of the dominant suppliers of broadband in the UK, you would expect a bit more visiability in support sites, as at time or writing nothing published in Google Home support site, despite they clearly being aware of it.

This is hidden in the advanced settings of your router, under Home Network – just chnage to “no”. 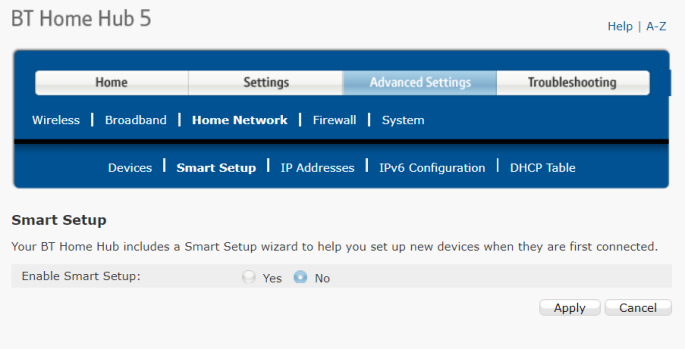